Alan Kohler: Morrison has made Australia a nation of technology freeloaders 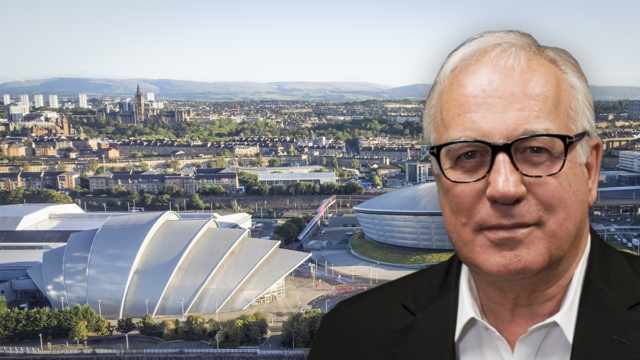 The Coalition’s long and winding road from ridiculing climate change plans to coming up with one of its own has produced the worst possible result for the world.

Basically, Prime Minister Scott Morrison will tell the UN climate conference in Glasgow this weekend that nobody has to do anything to achieve net-zero emissions by 2050 – it will just happen anyway through advances in technology.

The technology has been driven by emissions trading and petrol car bans that other countries have done, but hey – technology, not taxes and no mandates telling people what to do is The Australian Way.

Most people in Glasgow will dismiss him as a freeloader, or laugh at his gall to come to such a consequential conference with something so inconsequential, but some might seize upon it as a remarkably fine wheeze.

Of course! Just say that technology that others have fostered will take care of global warming because, you know, just go down to JB Hi-Fi, as Scott Morrison advised on Tuesday, and see what’s happened to the prices of TVs and computers, and how the power of them has increased, and you can see you don’t have to do anything to achieve net-zero emissions except put a bit of taxpayers’ cash into the pockets of renewable energy and hydrogen entrepreneurs, and – bingo – you’re there.

Of course, you can’t have a difficult 2030 target on the way to 2050 because two of the main technology solutions – hydrogen and carbon capture and storage – are too expensive to have any impact before 2030, and they are long-term ideas only.

Scott Morrison might actually blow up the Glasgow conference entirely by persuading some wavering national leaders that, by Jove, that Australian fellow is onto something!

We can just get up and utter the words “net zero by 2050” and go home to a ticker-tape parade.

It’s the “devastating scenario” that Ross Garnaut warned about last week: That Australia might punch above its weight in Glasgow and weaken the odds of a strong outcome.

Keeping global warming to less than 2 degrees is going to be hard enough without non-believers like Scott Morrison punching above their bantamweight.

And yes, of course Morrison is a non-believer in the science on this subject: iI is a political problem to be negotiated and sloganed and always has been.

It would be far worse if he actually did believe and understand the science, since it would mean he is knowingly endangering his own children’s future.

But as with most Coalition MPs it’s entirely wilful ignorance; they believe in science when it comes to their annual health check-ups or breeding their cattle, but climate change? Nah. What’s the politics?

Like a lot of political slogans, “Technology, not taxes” contains enough truth to seem plausible.

Renewable energy technology has been developing rapidly and there is no reason to think that’s about to stop.

Here are two charts of the cost and energy output of various forms of energy from a study by mathematicians at Oxford University, published last month: 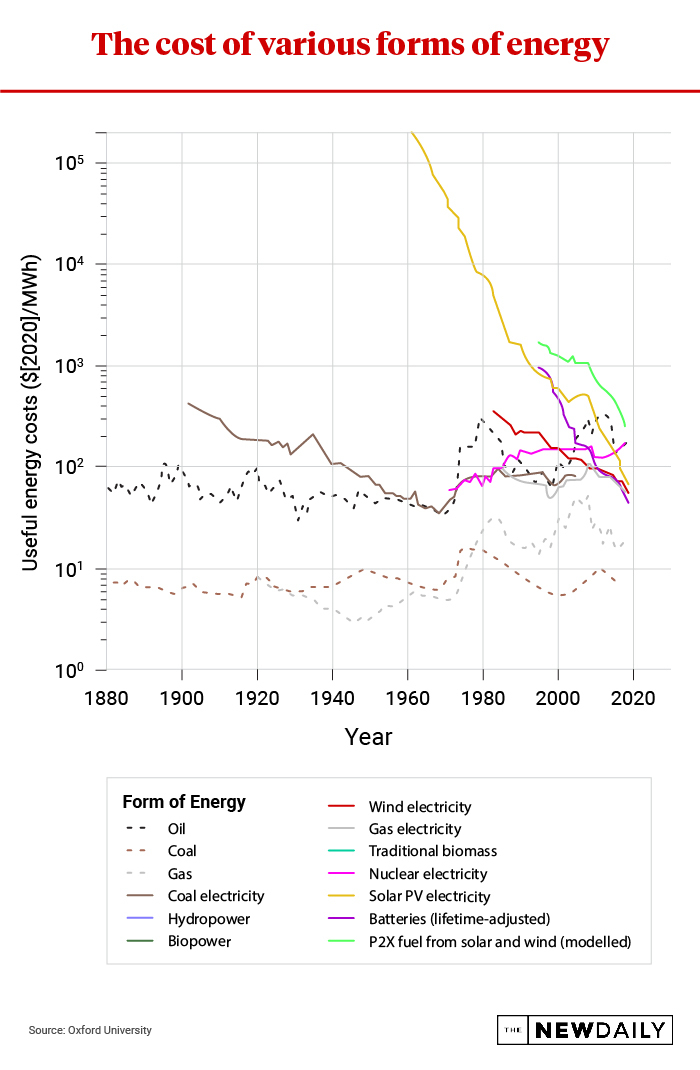 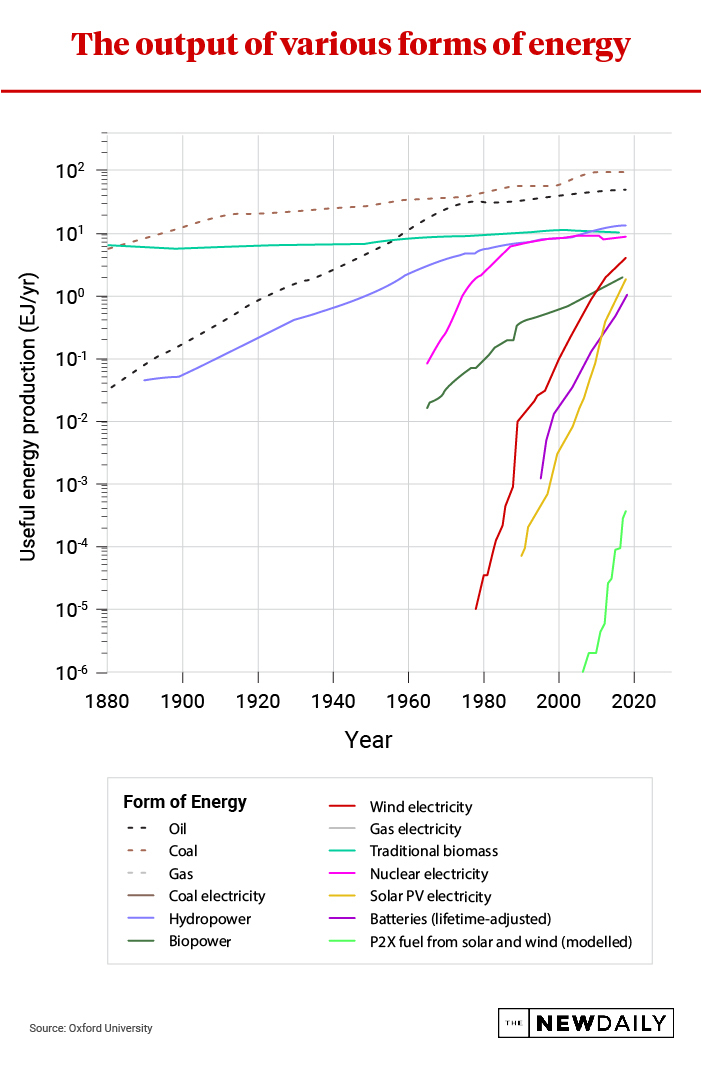 In other words, it’s 70 per cent technology stuff topped up with offsets.

And it’s true that there is some very exciting technology going on that has rapidly brought down the cost of solar and wind power to below the cost of new coal.

It’s happening because there are some emissions trading schemes, voluntary and legislated, (that is, taxes not technology) that are putting a price on carbon and making research into renewables worthwhile.

Separately, 24 countries, including the US, UK and Germany, have announced plans to ban or restrict the sale of petrol and diesel vehicles within a decade or so, which is turbo-charging research into electric vehicles and batteries.

Australia, needless to say, is not joining in any of those global efforts – our emissions trading scheme was gloriously repealed and there are definitely no petrol and diesel bans in the works.

So we are simply planning to freeload off those who have done those things: To claim the benefits of technology that we have done nothing to encourage.

The investment spruiked in this week’s plan is $20 billion, half of which comes from the Clean Energy Finance Corporation, which was set up by the Labor government in 2012 and is required to earn a return of 3 per cent above the bond rate, which means it can’t be used for subsidies.

Minister for Emissions Reduction Angus Taylor says the plan “will not shut down coal or gas production, or require displacement of productive agricultural land”.

Which shows that he doesn’t actually care about global warming – it’s a political attempt to hang onto regional seats in NSW and Queensland while picking up city seats with the “net zero” bit of the plan.

Trouble is, coal is doomed anyway, gas will last longer but not that much longer, and cattle farming will “require displacement” when the climate emergency eventually arrives and all bets come off, including beef and cow’s milk.

It would be better if Messrs Taylor and Morrison got the regions ready for that reality, instead of giving them cow manure.

Alan Kohler writes twice a week for The New Daily. He is also editor in chief of Eureka Report and finance presenter on ABC news

The post Alan Kohler: Morrison has made Australia a nation of technology freeloaders appeared first on The New Daily.

Long locks for men? Keep your hair on! | Brief letters