Alan Kohler: The RBA has absolutely no idea what’s going to happen. Nobody does 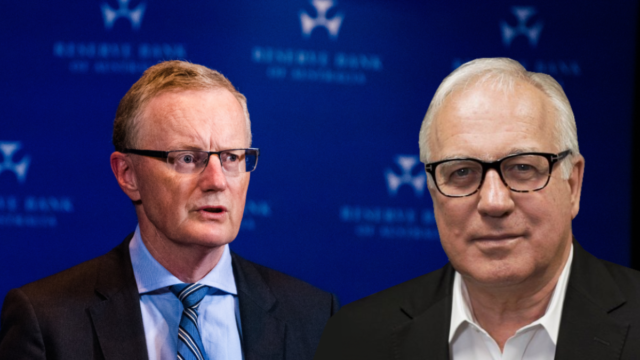 The most interesting part of Tuesday’s statement by Reserve Bank governor Philip Lowe, by a mile, was when he said they’d given up forecasting.

Avoiding recession up to NSW: Frydenberg

He said the RBA is not going to increase the cash rate until inflation is “sustainably” within 2 to 3 per cent, and then added: “it is not enough for inflation to be forecast in this range. We want to see results before we change interest rates.”

The RBA has 1348 staff, including about 400 economists, and when they arrived at work each day their job used to be fairly straightforward: to forecast. That is, to head inflation off before it happened.

And their rule of thumb was that if unemployment got to 5 per cent, inflation would follow, so they focused on making sure at least 600,000 to 700,000 souls were on the dole.

Unemployment hit 5 per cent in 2005 and kept going down to 4 per cent, so the RBA, foreseeing inflation, began rapid-fire rate hikes, from 5.5 to 7.25 per cent.

Along came the GFC, and down interest rates went again.

In 2011, unemployment hit 5 per cent again, and the RBA, once again foreseeing inflation, hit the brakes, putting the cash rate up from 3 to 4.75 per cent.

But through it all, inflation kept trending down, each peak lower than the last. Those rate increases put a lot of people out of work, but with the benefit of hindsight, they weren’t needed.

As Dr Lowe now acknowledges, the assumed inverse relationship between unemployment and inflation, known as the Phillips Curve, has broken down, at least for the moment.

It was invented by a Kiwi economist named Bill Phillips in 1958, but it always worked better in theory than in practice.

Now digitisation, automation and cloud computing have destroyed it entirely – by lowering costs and increasing competition, for businesses and workers.

Zero marginal cost and not much pricing power equals not much inflation as well, so unemployment can be much lower than previously thought without stirring inflation.

So now what? How do central banks work out what to do if they can’t just watch unemployment to see when inflation is around the corner?

After all, monetary policy has a lag of about 12 months, so you have to forecast 12 months ahead, don’t you, because that’s how long it takes your actions to have an effect.

That’s true, but it doesn’t matter – it’s all a mess because the Phillips Curve doesn’t work any more, so this time around interest rates won’t be increased until inflation has actually happened, and it’s about time.

Truth is, nobody has the faintest clue.

The economic uncertainties brought by the technology revolution, plus the ageing of the population, globalisation and the unprecedented amount of debt in the world have now been joined by three more uncertainties: The pandemic, China and climate change.

Dr Lowe said on Tuesday: “By the end of the year, within six months, most of us will be vaccinated, our lives will start to return to normal, we’ll be able to travel again and businesses will be able to do the things they need to do.”

Well yes, we hope so, except that the virus keeps mutating: In other countries the Delta strain is making vaccinated people sick, and China’s Sinovac doesn’t seem to be working very well against it at all.

What’s more, the spike in COVID cases in largely vaccinated countries like the UK and Israel is putting the timetable for getting back to normal into question.

Meanwhile, Australia’s problems with its main trading partner have been papered over by the iron ore boom.

The huge rise in the price and export volumes of our largest export are covering up the fact that the rest of our trade with China is in trouble, and China is working very hard to create alternatives to Australia for iron ore as well, in Africa.

The new iron ore mines in Africa are about five years off, but it’s unlikely the iron ore boom will last that long anyway: China will have to restructure its economy away from construction if it’s to meet its own carbon emissions target of net-zero emissions by 2060.

As will every country, after net zero by 2050 becomes the global standard this year.

Given the amount of investment needed, it might result in an inflationary stimulus, and food prices are already rising fast because of the very hot northern hemisphere summer.

Against that the financial system is going to come under increasing strain as global warming affects asset prices and the ability of debtors to service their loans.

How that plays out is anybody’s guess.

So yes, it’s not a bad idea to give up on forecasting, all things considered.

Alan Kohler writes twice a week for The New Daily. He is also editor in chief of Eureka Report and finance presenter on ABC news

The post Alan Kohler: The RBA has absolutely no idea what’s going to happen. Nobody does appeared first on The New Daily.

Martin Rowson on masks off or consequences – cartoon

Martin Rowson on masks off or consequences – cartoon