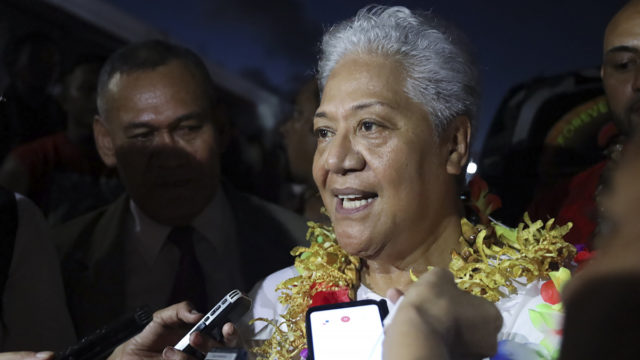 Australia must step up its 2030 climate ambitions in a worldwide effort to drastically reduce carbon emissions in the next decade, Samoan Prime Minister Fiame Naomi Mata’afa has said.

As Australian Prime Minister Scott Morrison refuses to confirm whether he will attend the COP26 climate summit in Glasgow next month, Pacific leaders are continuing to push Canberra for more serious climate action.

Ms Mata’afa said the upcoming United Nations climate conference could be a “point of no return” for global efforts to deal with the climate crisis.

“We need to inject some of that urgency and ambitious actions like what we have achieved with COVID-19 vaccinations to deliver the needed climate action,” she told an Australia Institute forum on Wednesday.

“We need to push for cutting emissions in half by 2030 to help reach carbon neutrality by mid-century.”

“We would like Australia to do that,” she said.

Australia has still not committed to a net zero by 2050 target, even as experts warn such a commitment is already behind the global curve.

“I don’t have an exact number of a level of reduction that we would ask with the Australians,” Ms Mata’afa said.

The Samoan PM said Mr Morrison would “not like” her answering questions about Australia’s emissions targets but the comments were “not new to him – the Pacific position has always been very clear”.

Pacific nations like Samoa are on the front lines of the climate crisis and are already feeling the effects of rising sea levels and higher incidence of natural disasters, Ms Mata’afa said in a speech to the online forum.

Ms Mata’afa also said Australia could do more to support Pacific nations with climate financing after Mr Morrison baulked at a $200 million commitment to the UN-backed Green Climate Fund in 2018.

The Abbott government promised to work within the fund but in 2018 Mr Morrison said Australia would not be “throwing money” into it and has instead pursued bilateral deals with individual Pacific leaders.

Ms Mata’afa and other Pacific leaders are strong supporters of the UN-backed fund, which has been unable to meet its funding targets.

On Wednesday, the Samoan PM said a “burning question” heading into Glasgow was whether this funding gap could be bridged.

“Perhaps they [Australia] could come back to the financing table,” Ms Mata’afa said when asked how Australia could step up its climate action.

“That would be a good start.”

Asked whether Mr Morrison should attend Glasgow, Ms Mata’afa said it was a decision for Canberra.

“We ourselves are finding it very difficult to make our way to Glasgow and even more challenging on the way back,” she said, later adding that UN organisers should facilitate digital attendance for world leaders.

Last week, the UK’s high commissioner to Australia, Vicki Treadell, said Downing Street will be “very disappointed” if Mr Morrison does not attend the Glasgow summit.

The post Australia must step up 2030 climate targets: Samoan PM appeared first on The New Daily.

Indosole introduces its SS21 collection to act as environmental innovators