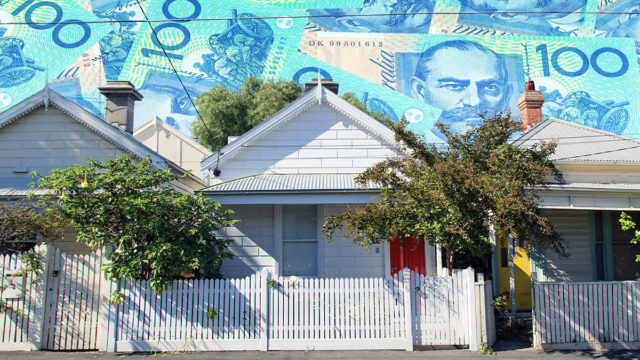 Australians became $518 billion richer in the March quarter as household wealth soared 4.3 per cent – breaking yet another record.

Average households are now worth $429,055 after soaring property and stock prices added $12.6 billion (15.3 per cent) to household balance sheets over the past 12 months alone.

“Household wealth grew more in the last year than it did during the preceding three years combined,” ABS official Katherine Keenan said.

But only those who own homes or shares are much better off, because 86 per cent of the March quarter growth came from property and stock prices.

That means inequality actually worsened over the quarter as those who don’t own property fell even further behind those that do.

The value of land and dwellings rose a whopping $434.6 billion over the quarter as property prices spiked across the country, rising over 10 per cent in major cities like Sydney and Melbourne.

Meanwhile, the sharemarket contributed $28.4 billion to wealth gains as the ASX soared to record highs just 12 months after the COVID crash.

Economists said on Thursday that the rise in household wealth was good news for the broader economy as people spend more money when they perceive their wealth to have increased.

This is known as the ‘wealth effect’.

“[It] tends to support spending and things such as vehicle sales, household furnishings and other household goods and clothing, utilities and recreation,” Mr Pickering told The New Daily.

The Reserve Bank is also watching the wealth data closely after saying in May that it could open the door to stronger economic forecasts.

“If the spending response to increased wealth is stronger than usual, a stronger economic path than the one envisaged in the baseline forecasts would eventuate,” the RBA said in May.

Economists are tipping the RBA will bring forward its timeline for a rate hike after the unemployment rate fell to 5.1 per cent in May.

CBA chief economist Craig James said the wealth data was a good sign for the broader consumer economy and the retail sector in particular.

But he said confidence would play a key role in determining whether the wealth gains actually led to higher spending.

“Of course confidence has a big bearing on whether higher wealth (and related saving) is realised in higher spending,” he said in a note.

“In the current period, COVID-19 case numbers and vaccination rates have a big influence.”

The ABS wealth data comes just a day after a Credit Suisse report revealed the number of millionaires in Australia has soared in recent years to about 1.8 million people.

The Guardian view on political trust: voters put store by it, the PM does not | Editorial