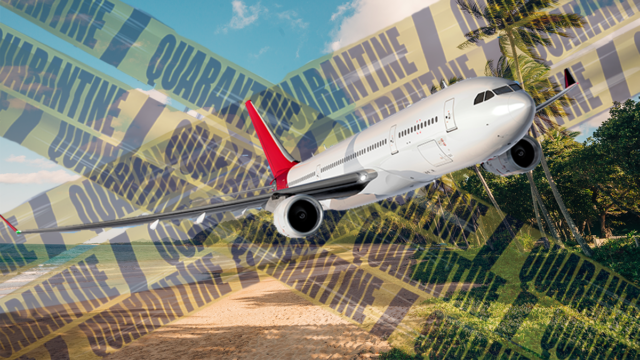 The Morrison government’s economic recovery plans have been thrown into chaos after Greater Brisbane entered a snap three-day lockdown less than a day after JobKeeper ended.

The outbreak in Queensland has plunged tourism businesses into fresh uncertainty, scuppering confidence just as the government’s $1.2 billion discounted airfare package opens up to consumers.

As the federal government fails to meet its vaccine targets, Western Australia and South Australia have responded to the latest outbreak by closing borders to Greater Brisbane, Victoria has declared the region a hot spot, and New South Wales Premier Gladys Berejiklian has warned residents to reconsider their travel plans.

The $60 billion tourism industry is now pleading with the federal government for a new lifeline, arguing they’ve been plunged into a business-crushing shutdown without JobKeeper to save them.

“Easter was supposed to be our great hope to mark a turnaround and the beginning of a recovery,” Daniel Gschwind, chief executive of the Queensland Tourism Industry Council, told The New Daily.

“It’s a devastating blow … consumer confidence will be shattered.”

More than 154,000 workers in Queensland were still accessing JobKeeper in February, with participation concentrated in tourism-reliant regions like Cairns that are heavily affected by border closures.

Mr Gschwind said the aviation package, which is supposed to subsidise at least 800,000 airfares to tourism-reliant areas, will now be much less effective.

He said confidence would take time to recover and warned that fears over the highly contagious UK strain of the virus would encourage state governments to continue using tough border restrictions.

University of Melbourne professor Jeff Borland, a leading labour market economist, said employment should rebound if the lockdown isn’t extended, but that the snap lockdown had exposed flaws in the government’s economic recovery plan.

“The problem with half-priced airfares is that you’re relying on people to actually take up those offers,” he told The New Daily.

“That could depend on a whole range of factors, but one of them is confidence that travel plans won’t be disrupted … targeted assistance should be more direct to businesses.”

Treasurer Josh Frydenberg has previously warned that border closures would be more costly for the states when JobKeeper ends.

“These lockdowns are really unsustainable in a world where JobKeeper doesn’t exist,” he told The New Daily.

Mr Pickering said the national vaccine rollout, which has failed to meet the government’s initial targets, had left the economy more vulnerable to coronavirus outbreaks without JobKeeper to safeguard businesses.

Just 541,000 Australians have received COVID-19 vaccines to date, far fewer than the four million jabs the government had initially forecast by the end of March, officials revealed on Sunday.

“The vaccine rollout has been a complete mess since it began and it really doesn’t provide that protection that the economy needs,” Mr Pickering said.

Deloitte Access Economics partner Chris Richardson said the snap lockdown had exposed a “gap” in Australia’s recovery, with the end of JobKeeper coming amid a slower vaccine rollout.

Although the broader recovery is placed to overcome the post-JobKeeper bumps, Mr Richardson said Brisbane’s snap lockdown was a reminder of the ongoing uncertainty for workers in vulnerable sectors.

“[JobKeeper ending] is stunningly unfair, of course. It is not their fault,” he said.

“But unfair doesn’t mean we shouldn’t do it.”

The government says it was right to end the wage subsidy scheme despite criticism from Labor, arguing that ongoing support was starting to create more problems than it was solving by propping up unviable businesses.

“While we are not out of this crisis yet, we must remain disciplined when it comes to economic policy,” Mr Frydenberg wrote in an op-ed on Monday.

“To do otherwise would subject the current generation to higher taxes and bequeath future generations a higher debt burden.”

Dismissed as the unwanted Games, just how did these Olympics steal our hearts? | Emma John

H&M ban of Xinjiang cotton under criticism in China