Most headlines about Thursday’s capital expenditure statistics concentrated on the better-than-expected 6.3 per cent rise in private capital investment to $31.5 billion in the March quarter from the December period.

That is nice, but it wasn’t the important part of the Australian Bureau of Statistics release.

What matters most about the ABS capex survey is that it looks forward, asking the nation’s CFOs not just what they have invested so far this financial year, but also what they expect to invest next year.

The way it tends to work is that the CFOs collectively grumble “not as much as this year if I can help it”, and make low forecasts before the new year starts.

As the year progresses, more cash is winkled out of them and the end result is substantially higher.

If the trend of increasing investment through the year holds, the new financial year should deliver the best capex numbers since the minerals boom years. 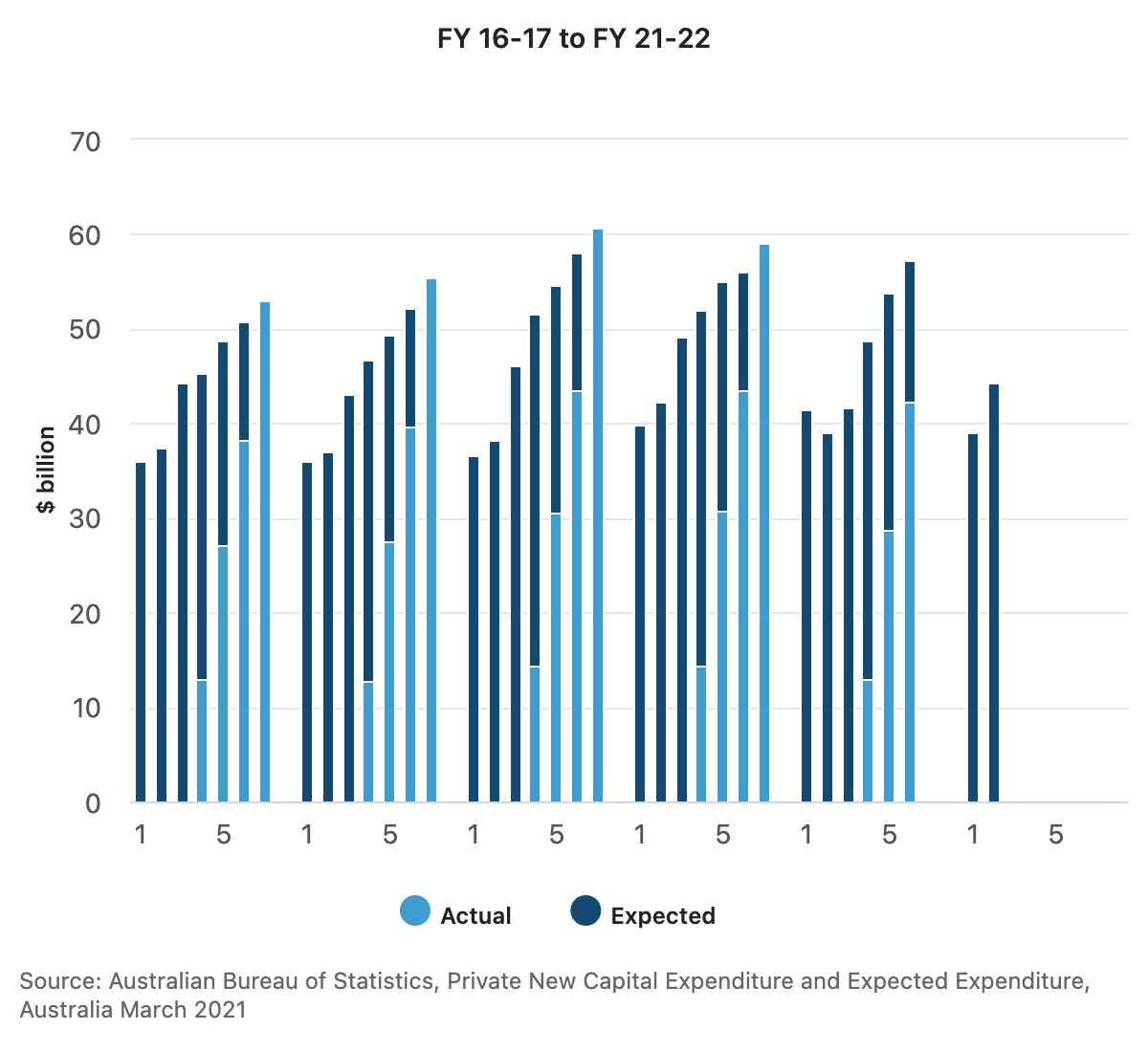 And it needs to. The lack of strong private capex has been holding the economy back, limiting productivity growth and our prospects for sustainably increasing living standards.

Furthermore, the growth is in the non-mining sector – mining capex is relatively flat.

The pandemic and our lack of diplomatic ability notwithstanding, improving capex will be necessary if our economic recovery is to be more than a catch-up consumption bounce, sliding back into the lacklustre growth of the Coalition’s pre-COVID years.

But (you knew there was going to be a “but”, didn’t you?), even if this stronger second estimate is the harbinger of a return to 2014’s level of investment of about $150 billion, it will be substandard, representing only about 8 per cent of GDP.

Leaving aside the mining boom, non-mining business investment by itself averaged 12 per cent over the three decades to 2010.

Our economy and population is larger, requiring and justifying more investment.

While mining capex was relatively flat, there was an omen of stronger times to come in the sector in the detail of ALS Ltd’s annual results on Wednesday.

Macquarie analysts pointed to significant capital raisings by junior miners that is now being put to work on exploration, giving ALS more revenue.

ALS’s Geochem sample flow was up 13 per cent in the March quarter on the December period, which was up 10 per cent on September.

Macquarie estimates the April Geochem flow was about 30 per cent higher than the same 2019 period.

After the exploration eventually comes the projects requiring bigger capex to turn into mines.

The mining industry understands better than most that investment is needed to grow.

Here’s hoping the non-mining CFOs get used to that idea as well.

Mandatory vaccinations for care workers and the blame game | Letters