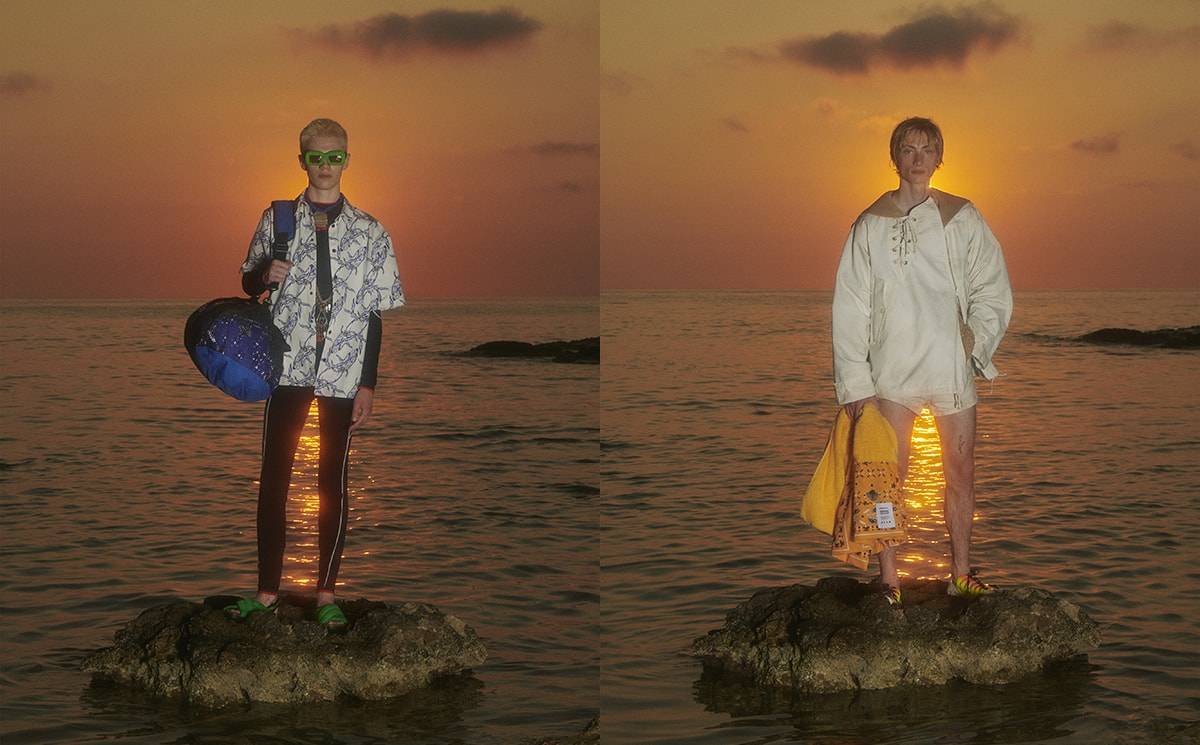 Canon infinito – Infinite Canon – like a musical composition that unfolds in circular melodies.

The title of the song by Lorenzo Senni, the project’s soundtrack, encapsulates the atmosphere of the entire collection, of a story that follows the moments of a long day, on a desert beach, composed in an intense joint effort by Massimo Giorgetti with Francesco Nazardo, the No Text Azienda and Senni.

Canone infinito, like the dazzling light of the sun that hour after hour becomes gentler before giving way to night and returning in the morning, repeating its dance in a stubborn perpetual motion. Infinite like the horizon where the sea melts into the sky. Stephen Milner’s photographs, from the Spiritual Good Time series, are the inspiration behind the aesthetic codes: 1990s style, guys in surf suits and bleached hair, surrounded by blue waves and
fiery sunsets. 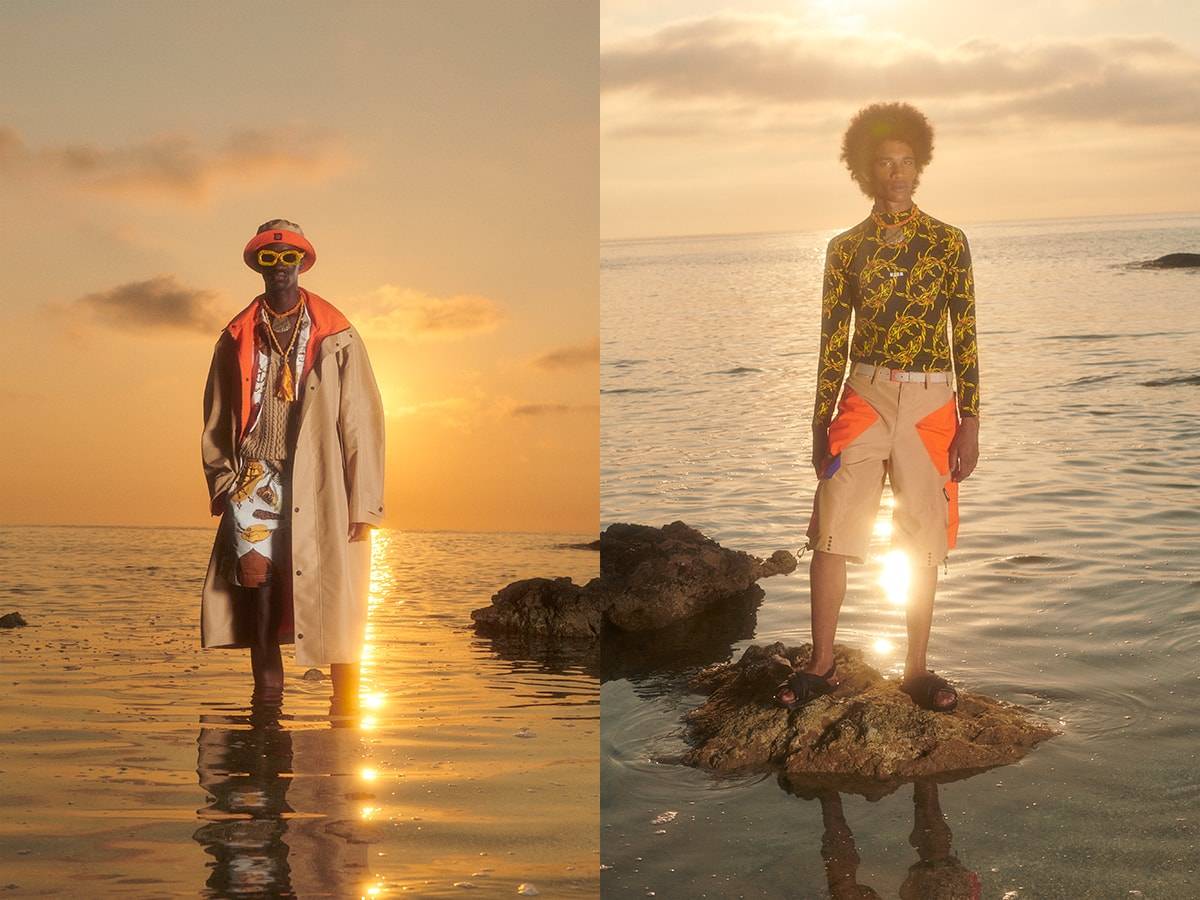 Intense orange and apricot, total black and inky blue, yellow, green and a touch of neon; the
palette seems to echo the saturated colours captured on the film shots taken by the photographer, broken up by soft tones of oyster white, sand and wisteria. The artisanal washes and the watercolour prints are reminiscent of liquid patterns of water reflected on rippling water; solarised dyes, almost a new tie dye, created surprising effects on the clothes as if they have been left to fade under the heat of the sun. Like chromatic clouds, melange items in woven cotton webbing recreate organic, rough and three-dimensional textures. 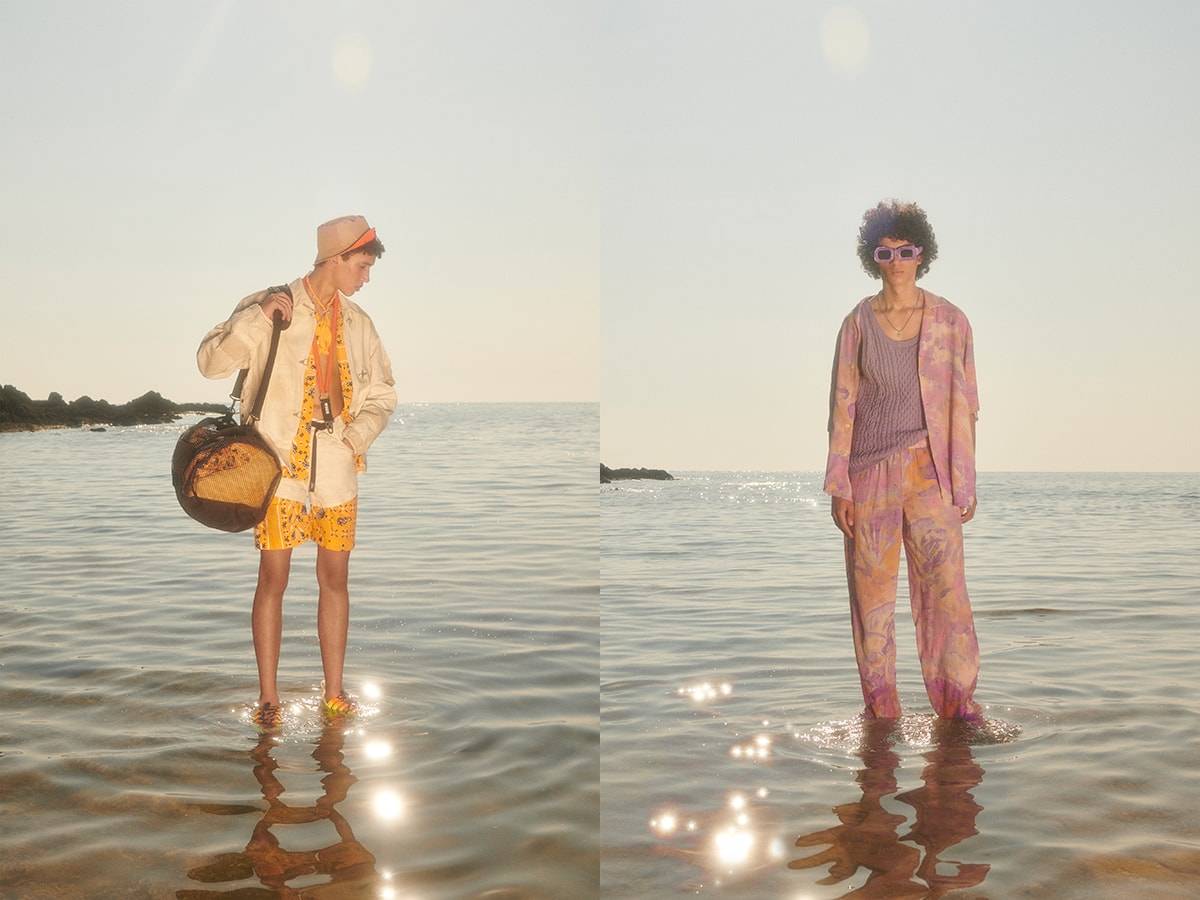 Wet clothes stick to the skin, along with the scent of salt. Elements embodying an underwater imaginary world appear everywhere. Little sharks turn into laser-printed pictures along with paisley patterns, they join tribal motifs on sports shirts and lycra leggings, on poplin or cotton jacquard shirts and Bermuda shorts. Crabs or “punk” shells studded with piercings appear on knitwear and shirts, stencil-effect mermaids feature on mohair yarns. Large fish in garish tones become patches on unravelling knitwear, with an “unmade” effect”, and bandana prints combine classic motifs with small shells and seem to be designed for an underwater rave, alongside diving suits in seamless technical fabric. 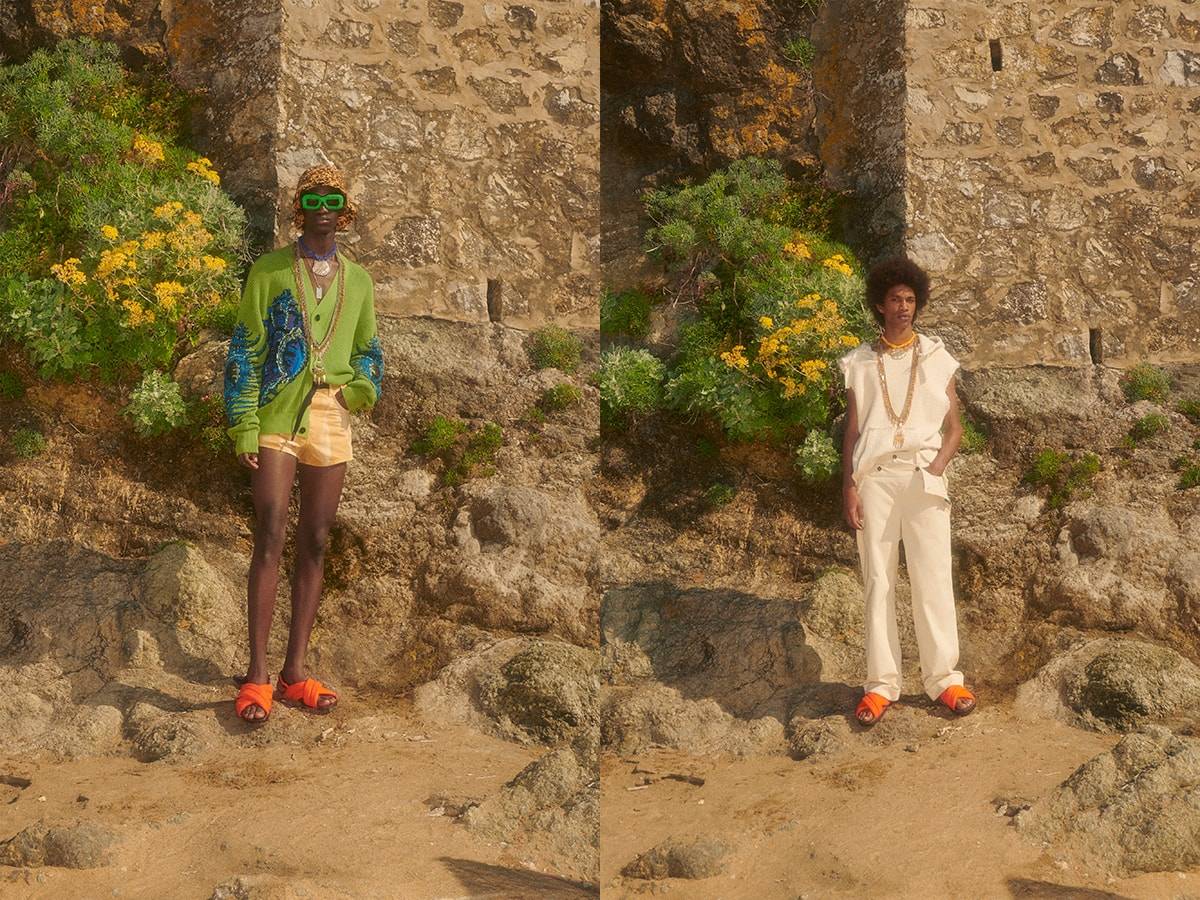 Details come from the nautical world: metal fasteners on striped tops, detachable collars on the shoulders of oversize sweatshirts, sand-coloured sweatshirts in raw-cut bouclé worn with sailor trousers, cotton canvas jackets, old uniforms transported into the future. Riding spinning harmonies, surrounded by liquid flashes, MSGM boys live a suspended dream. Like a generation cast away on a hidden island out of time and space, where nature is wild, on Senni’s hypnotic beats, experiences are intense, amplified, as in psychedelic trips.

Post-pandemic sales surge may be short-lived