Treasury defends $27 billion JobKeeper waste, says it knew some ‘may not need support’ 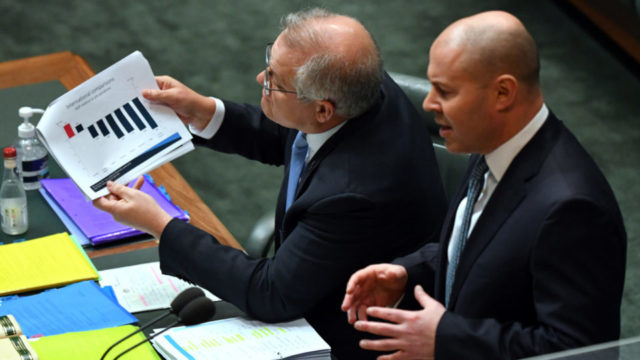 Treasury has defended a decision not to claw back $27 billion worth of JobKeeper payments to businesses that maintained or increased sales, arguing it would have “muted the recovery” from the COVID-19 crisis.

The government published a review of the first six months of JobKeeper on Monday afternoon, revealing that 38 per cent of the first $70 billion paid under the scheme went to companies that saw no fall in sales.

The long-awaited Treasury report is the largest assessment of the $90 billion wage subsidy program to date, covering April to September 2020.

It broadly confirmed earlier budget office data from Labor MP Andrew Leigh, which found that $13 billion was paid to companies with higher sales.

But it also revealed that the average sales decline of JobKeeper firms in the September quarter was only 14.8 per cent – less than half of that required to become eligible for the scheme.

Despite this, Treasurer Josh Frydenberg said on Monday that the review demonstrated that JobKeeper had saved the jobs market, supporting almost 30 per cent of all workers at the height of the first COVID-19 wave in July 2020.

“The program did what it was intended to do,” he said on Monday.

The Reserve Bank has previously estimated that the scheme saved 700,000 jobs.

But even Treasury now admits that billions of dollars went to businesses that saw a rapid sales rebound, or incorrectly predicted their sales would fall.

“Some businesses didn’t have large declines in their turnover in the first six months of the program when compared with a year earlier,” it said.

Shadow treasurer Jim Chalmers said on Monday that the report is a “stunning admission of failure by Josh Frydenberg”.

“A competent Treasurer could have saved those jobs without wasting billions and billions of dollars on businesses that didn’t need it,” he said.

Treasury said it was aware in June that many firms were posting sales growth and showing signs of recovery, but it did not re-test eligibility until the end of September because it had promised payments for six months.

“It was understood that this risked making payments to businesses that recovered quickly and may not need support by the end of this period,” it said.

But even after reports emerged last year of publicly listed firms receiving the government payments and then paying out dividends to shareholders, the government continued to pay JobKeeper.

The trend became known as “DividendKeeper” on social media, with companies like Premier Investments and Harvey Norman shown to be major culprits.

Treasury revealed on Monday that about 18.8 cents of every dollar paid under JobKeeper between April and September went to firms with sales that did not fall by 30 or 50 per cent, as required by the eligibility criteria.

About 20 cents of every dollar went to firms with sales that rose.

Treasury said 99 per cent of these payments went to small businesses that employed four people on average, while about $200 million went to large companies with more than $1 billion in annual sales.

Claw back would ‘mute recovery’

Labor MPs and advocates have called on the government to claw back JobKeeper payments handed to companies that needed no help.

Less than $1 billion in JobKeeper has been voluntarily returned to date.

But Treasury doubled down on its earlier defence of JobKeeper on Monday, arguing claw backs would have hurt the COVID recovery.

It claimed that companies would have scaled back their sales in order to avoid being kicked off the scheme if a claw back clause was included.

Treasury said it wanted to encourage businesses to “operate, adapt and innovate”, and that a clawback mechanism would have constrained this.

“The introduction of such a mechanism would likely have reduced the overall level of activity and muted the recovery,” Treasury said.

Treasury economists used analysis of average business structures to estimate that firms would have a profit incentive to reduce sales if their turnover recovered to between 70 and 113 per cent of pre-COVID levels.

However, this analysis did not take into account fixed costs like capital and also assumed that the productivity of workers remained the same.

Using 2018-19 data, the analysis also did not factor in how profitability changed as business operations scaled up and down during COVID-19.

The Treasury data also revealed that most businesses did not meet the sales decline tests set by the government, which required turnover to have fallen by 30 per cent (50 per cent for big business) on a previous year.

The median turnover decline for recipients was just 28 per cent by the June quarter and only 23 per cent when the September quarter ended.

This figure featured in Treasurer Josh Frydenberg’s press release about the report on Monday afternoon, but it is misleading without the average.

Although businesses with more than $250 million in sales accounted for just 0.2 per cent of JobKeeper recipients, they took 11 per cent of the money.

Treasury estimated the unemployment rate would have peaked at least 5 percentage points higher and stayed above 12 per cent for two years if it wasn’t for the JobKeeper program.

It said 12 per cent of recipients (about 375,000 workers) in May had been stood down from their job and were relying on JobKeeper pay.

From June to September 2020, about 260,000 stood-down workers on average were relying on JobKeeper payments as their sole income.

“JobKeeper was designed to guarantee support for six months to provide certainty to business and support the broader economy,” he said.

“This timeframe was linked to the health advice that severe restrictions could be in place for six months or more.”

The post Treasury defends $27 billion JobKeeper waste, says it knew some ‘may not need support’ appeared first on The New Daily.

Get ready for stiletto Crocs, courtesy of Balenciaga