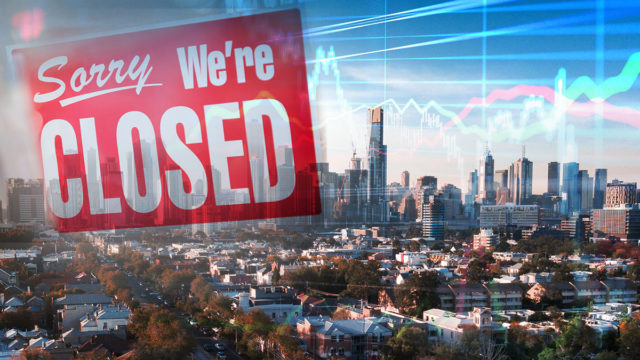 The Victorian government is under pressure to roll out financial support for local businesses after a key industry group warned the seven-day lockdown could cost them $1 billion.

And the Australian Council of Trade Unions has castigated the Morrison government for bungling the vaccine rollout and “prematurely ending JobKeeper”, which it wants reinstated.

From 11.59pm on Thursday, non-essential shops will be forced to close their doors and hospitality businesses will be restricted to serving takeaway only.

The Victorian Chamber of Commerce and Industry said the snap lockdown would be “devastating” for businesses as they could no longer rely on the support of pandemic rent relief or JobKeeper wage subsidies.

“This lockdown will break some businesses, no doubt about it,” VCCI chief executive Paul Guerra said in a statement.

“So many were just hanging on by a thread, and that thread has now been severed.”

The business group estimates the lockdown, which is the first to extend beyond a weekend since the end of JobKeeper on March 28, will cost the local economy about $1 billion and weigh on consumer confidence and Victoria’s national reputation.

“The cost is not only monetary. There’s also the huge cost of jobs, confidence and reputation,” Mr Guerra said.

“We have taken a massive hit today about how we will be viewed on a national scale. All Victorians deserve better.”

The Victorian head of national employer association Ai Group, Tim Piper, said in the absence of JobKeeper the lockdown would have “a major impact on businesses of all sizes”.

He said the lack of new support measures in the announcement on Thursday had reinforced “the view of Victorian businesses that they are an afterthought in dealing with COVID”.

And small businesses are certainly hopeful the Victorian government will roll out financial supports in the days ahead.

Despite a strong rebound from the pandemic recession, businesses are carrying a lot of debt and will struggle to pay their staff during lockdowns now that JobKeeper has ended.

Frank Mincone, owner of Windsor-based hip-hop and art supply shop Union Heights, said news of the seven-day lockdown had “taken the wind out of our sails”.

“My issue is, the last time we had a snap lockdown there wasn’t any financial packages or benefits for retail; it only went out to hospitality,” Mr Mincone told The New Daily.

“That was a short one, so I paid my staff anyway. But this time I can’t afford to pay staff members for seven days of not being here.

Asako Miura co-owns Ima Project Cafe in Carlton and is also holding out for a government support package.

Ms Miura said she was grateful the cafe would be allowed to serve takeaway during the lockdown but noted this was insufficient to cover her overheads.

She told The New Daily the cafe is effectively paying double rent at the moment because on top of its regular payments it has to pay back the rent it deferred during lockdowns last year.

“It’s going to be a struggle,” she said.

“Even just one week – it’s a big hit for our business.”

The Australian Council of Trade Unions said the Morrison government bore clear responsibility for the lockdown and any associated job losses, as it had failed to provide leadership on quarantine and presided over a sluggish vaccine rollout.

“People will lose work during this lockdown, thanks to the federal government’s decision to completely end JobKeeper early,” ACTU president Michele O’Neil said in a statement.

“The Morrison government must reinstate JobKeeper where it is still needed. While the vaccine rollout continues to flounder there will be thousands of businesses and millions of workers who continue to need support.”

“Business support as soon as possible is absolutely critical,” she said.

“And this is also a time for all councils to consider rate reductions.”

The post Victorian businesses call for more support in face of $1 billion hit appeared first on The New Daily.

House of Denim / Jean School – Education is on