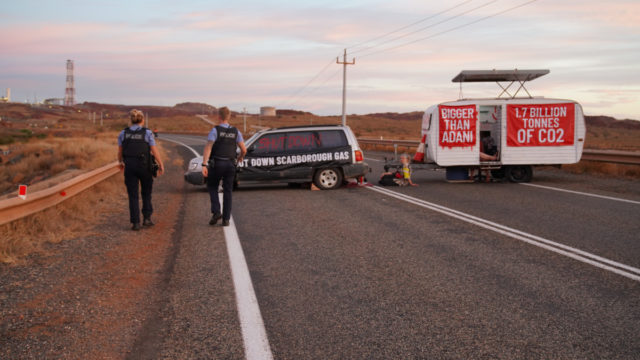 Climate activists are continuing to block access to Woodside’s Burrup Hub in Western Australia in a protest that has frustrated the company and the workers’ union.

Two women and a man have chained themselves to concrete barrels in vehicles blocking the road that leads to facilities including Woodside’s Karratha gas plant and Pluto LNG plant in the Pilbara region.

A car and a caravan were parked across a section of Burrup Road early on Wednesday, leaving a queue of vehicles unable to pass them.

The protesters were issued move-on notices but have remained in place and are vowing to maintain the blockade for as long as possible.

Protestors remain locked to their barrels, while supporters have been moved on. We will provide further updates soon.

Woodside said it was maintaining safe and reliable operations at its facilities.

“Overnight, protesters took action that compromises the safety of people who are completing shifts at Woodside and other facilities on the Burrup Peninsula,” a spokesperson said.

“Woodside respects people’s rights to protest peacefully and lawfully but actions such as these that endanger the safety of others go beyond those rights.”

The Australian Manufacturing Workers Union called on protesters to end the blockade so workers could safely enter and leave their workplace.

“This isn’t a fight you need to be having with our members. The workers just want to return home or get to work safely and do their job properly,” WA state secretary Steve McCartney said.

The Scarborough Gas Action Alliance said an emergency access road had been left open and there had been “no safety risk” from the blockade.

Protester Petrina, a mother and school teacher, said Scarborough would be the most polluting fossil fuel project in Australia.

“I feel compelled to blockade Australia’s biggest gas hub for as long as possible because we need to stand with traditional custodians and shut down Scarborough,” she said.

Woodside is proposing to develop the Scarborough gas field through offshore facilities connected by a 430-kilometre pipeline to its Pluto LNG onshore plant.

The Pluto facility will be expanded as part of the development.

“Expanding production of fossil fuels in 2021 – especially through mega-projects like Woodside’s irresponsible Scarborough project – is incompatible with protecting Australian lives, livelihoods and the places we cherish from future climate harm,” says @timinclimate. pic.twitter.com/aojB2ZmXbk

There are also concerns about the impact the project will have on heritage-listed Murujuga rock art on the Burrup Peninsula.

Environmental approvals granted to the project will be challenged in WA’s Supreme Court next month by the Conservation Council of WA.

But Premier Mark McGowan has flagged his government could intervene if the court ruling threatens the state’s energy supply.

“The state government will do what it has to do to make sure industries stay open,” he told reporters.

“Other projects have received approvals that this might have an implication for. We want to keep the lights on and we want to make sure that our hospitals continue to function and we need energy for that purpose.”

The Australasian Centre for Corporate Responsibility this week said Woodside had “declared war on the climate” and the project posed an unacceptable level of risk to shareholders.

LVMH to recycle textiles in partnership with weturn

How Pitti Uomo is preparing for condensed 100th edition