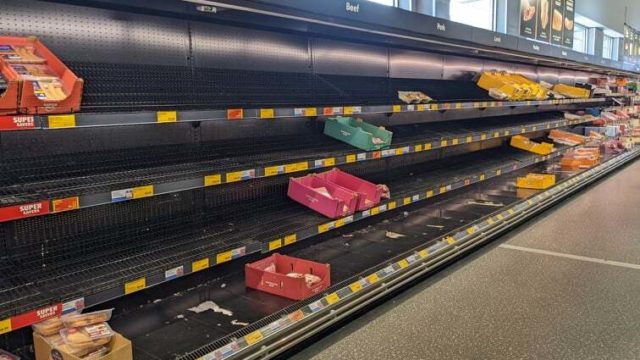 Supermarket shelves are bare, cafes are closing and people needing haircuts have been turned away as the Omicron staffing crisis escalates.

In some towns, bins are overflowing onto streets after the Christmas break – there simply aren’t enough rubbish collectors to drive the trucks.

Australians are being warned to expect food shortages and business closures to worsen over the next three weeks as governments scramble to fix buckling supply lines for everything from chicken to paracetamol.

Businesses say the disruptions reveal an economy straining under the weight of record numbers of COVID-19 infections, with hundreds of thousands of workers across the nation forced into isolation this week.

Australia reported 103,689 COVID cases on Wednesday, bringing active cases to 723,137 – which is a worse outbreak than the United States on a per capita basis.

Sandy Chong is down seven hairdressers at her Newcastle salon.

She said hairdressers across the nation are turning away customers because up to 40 per cent of staff cannot travel to salons.

“It’s very disappointing when a business has to cancel clients,” said Ms Chong, chief executive of the Australian Hairdressing Council.

“Omicron hasn’t even peaked yet.”

In a week that started with supermarket bosses warning shoppers to settle for substitute groceries due to food shortages, the Omicron staffing crisis has quickly worsened.

And after KFC announced a chicken shortage would force it to operate a “reduced menu”, McDonald’s said on Wednesday it had been forced to shorten trading hours at restaurants due to staffing issues.

“Some McDonald’s restaurants have had to temporarily reduce operating hours due to staff isolation requirements,” a spokesperson said.

“We appreciate our customers’ patience and understanding as we continue to prioritise health and safety during these times.”

Other fast-food chains could be on the brink of making similar moves.

Domino’s, Oporto and Red Rooster all confirmed the staffing crisis had affected their businesses but noted the challenges had not yet affected their customers.

“Our supply chain is currently experiencing pressures unlike anything we have experienced before,” a spokesperson for Craveable Brands, the parent of Red Rooster and Oporto, said in a statement on Wednesday.

“Our supply partners have gone above and beyond to assist us in achieving relatively uninterrupted supply to date, but we are forever mindful that the situation is not easy and that it can change at any time.”

Across the hospitality sector, which was hit particularly hard by regular lockdowns in Victoria and New South Wales in 2021, it’s a similar story.

Wes Lambert, CEO of the Restaurant and Catering Association, said some businesses have been forced to close because there are no staff to make coffees, cook food or serve customers.

He said when they reopened, they would likely have to hike prices to cover the rising cost of produce.

The federal and state governments are convening emergency meetings with industry, unions and health experts this week to chart a path out of the crisis, with plans to ease isolation rules for about a million workers.

First unveiled on Monday, the plan will allow close contacts of positive cases who work in critical industries such as food distribution to continue working if they show no symptoms and return negative COVID tests.

The new rules already apply to food workers in some states, but national cabinet will discuss on Thursday whether to expand them to teachers, rubbish collectors and people working on public transport.

Business groups said the new rules would not solve the problem, however, as staff shortages are being caused as much by people catching COVID-19 as they are by close contacts being forced to self-isolate, with infection numbers not expected to peak in Australia for several weeks.

“Businesses believed government that vaccination was the answer and yet here we are with one of the highest vaccination rates in the world and yet we still have these restrictions.”

At a meeting of industry leaders on Wednesday, Prime Minister Scott Morrison urged businesses to be “patient” as COVID cases escalate.

“With so many people getting COVID that is clearly going to take more and more people out of the workforce,” he told the virtual meeting.

“It’s important that we continue to problem solve across all these areas, but we [also] require a fair bit of patience.”

National cabinet will meet on Thursday to endorse the proposed relaxation of isolation requirements.

The emergency meetings will also discuss the need for essential workers to get booster shots and for workplaces to be cleaned properly.

But unions fear the changes will water down health and safety standards and expose Australian workers to even more Omicron infections.

Australian Council of Trade Unions secretary Sally McManus wrote to Prime Minister Scott Morrison on Monday to request an urgent meeting about the crisis and plans to relax health rules.

“Unions will not accept a watering down of OHS rights and obligations. We need protection during this period, not more risk,” Ms McManus said.

However, unions and business groups appear to agree that there needs to be a massive expansion in the availability of rapid antigen tests (RATs).

The Morrison government has come under criticism over shortages of RATs in recent weeks amid reports Australians are being pushed to the wall by an inability to access affordable testing.

The New Daily spoke to several such workers on Wednesday.

One worker, Frank Black, has been trucking for about 35 years, delivering everything from supermarket goods to machinery.

“[The government thinks], ‘we’re going to keep things going, and it doesn’t matter if people get infected,’” he said.

National cabinet will release a statement about the new isolation rules on Thursday.

A treasured letter to Uncle Bob in Malta | Brief letters

Quebec’s French language policy is nothing to rebel against | Letter