‘Scapegoating’: Ruston slammed for suggesting unemployed should tool up to solve crisis 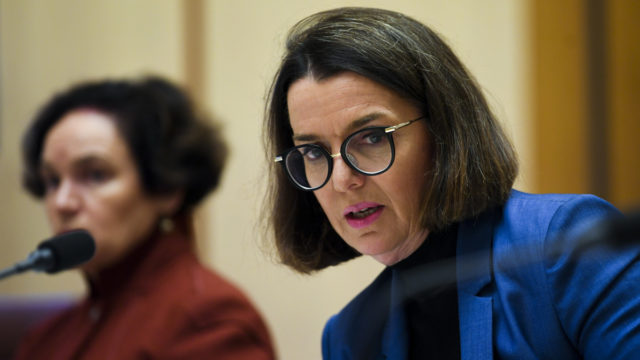 Government minister Anne Ruston has been slammed for suggesting unemployed workers should take up tools to ease crushing workforce shortages brought on by surging Omicron infections.

As hundreds of thousands of workers isolate due to the spread of the variant, there aren’t enough transport, warehouse, retail and services staff left to keep businesses open, supermarkets stocked and even some bins emptied.

Ms Ruston, who is acting small business minister this week, suggested on Wednesday the government wants to “unshackle” employment opportunities for those without jobs to help address this staffing crisis.

“Anybody who is currently on unemployment benefits who is able to work, we would be really keen for them to undertake some really active investigations about how they could help out,” Ms Ruston said.

But the idea drew immediate backlash from social services advocates, who accused the government of blaming workers for their own failures.

“The reason we have a worker shortage is because so many people are sick, and they can’t get at-home tests to slow the spread of the virus,” Ms Azize said in a statement on Wednesday.

“People out of work aren’t to blame for this crisis. They are the ones hardest hit.”

Australian workers have told The New Daily that the scarcity of rapid antigen tests has left them feeling “abandoned” over the past fortnight.

The Morrison government met business groups on Wednesday to nut out ways to get more people at work and will take a proposal to ease isolation rules for many staff to national cabinet on Thursday.

But even business groups don’t believe easing isolation rules will fix the core issue, which has been created by surging coronavirus infections, while unions fear it will expose more workers to the virus.

Antipoverty Centre spokesperson Kristen O’Connell said Ms Ruston is trying to use unemployed people to misdirect and obfuscate government failures on the Omicron variant that have led to large food shortages.

“They are so disdainful of paid workers and so patronising towards unemployed people that they think these jobs are unskilled, or that employers are willing to hire new staff to fill holes in the roster due to temporary absences,” Ms O’Connell said in a statement on Wednesday.

“Unemployed people are desperate for sustainable jobs and adequate support.”

Ms Ruston’s comments came after the Morrison government was criticised this week for ignoring calls to suspend mutual obligation requirements for job seekers, despite the latest outbreak soaring beyond 723,000 active coronavirus cases.

Australia’s daily infection rate was worse than the United States on a per capita basis on Wednesday, despite the US recording a spike in cases.

Advocates have urged the government to at least ensure job seekers can attend job provider appointments remotely to minimise exposure.

“People on JobSeeker are forced to apply for up to 20 jobs a month. A quarter of people on the payment have a job. Many of these are likely sick essential workers,” Ms O’Connell said.

“People on Centrelink poverty payments are being exposed to the virus because they can’t afford to stay home.”

The post ‘Scapegoating’: Ruston slammed for suggesting unemployed should tool up to solve crisis appeared first on The New Daily.

Martin Rowson the 5th anniversary of the Brexit – cartoon