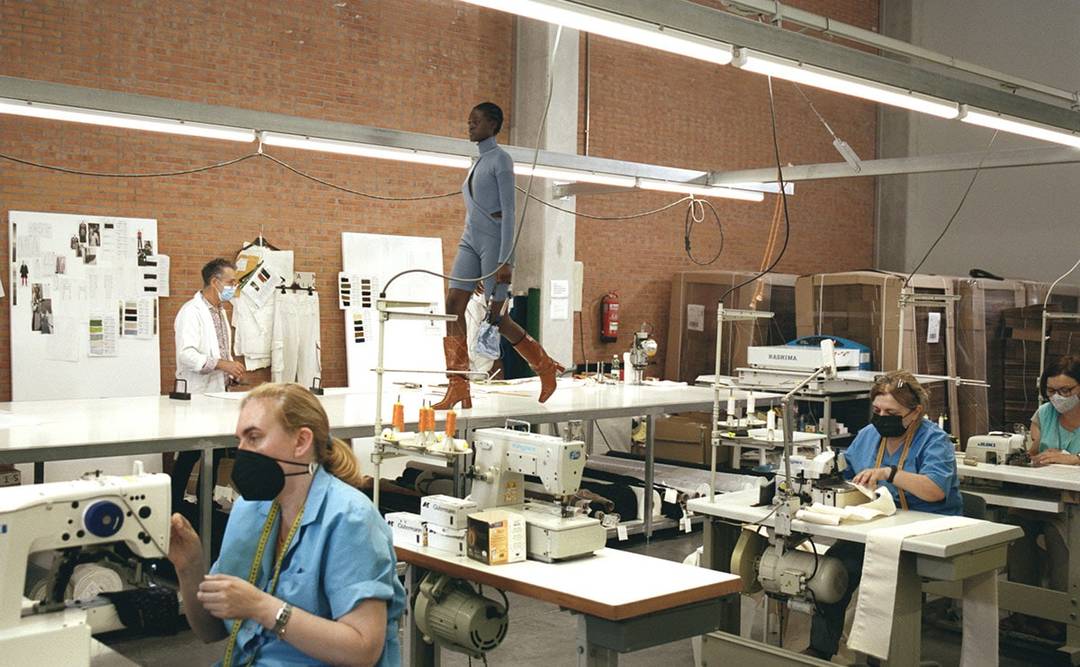 In a world filled with giant fast-fashion retailers – with their equally enlarged carbon footprints and unethical employment systems – contemporary consumers are wising up to the advantages, personally and politically, of supporting smaller independent brands. Nowhere can this story be seen more clearly than in Spain, a country famed for its rich tapestry of cultural influences and skilled artisanal craftsmanship. Here contemporary brands are creating a new kind of fashion: small, sustainable, and 100% Made in Spain.

Miista Factory in Galicia
Sustainable means slowing down, creating concrete actions rather than elaborate advertising campaigns that spin one story while the workers on the ground tell another.

But it’s been a complicated journey to this place. In the 1990s a number of fast-fashion brands emerged in Spain, including beloved high-street staples that helped speed drive the rise in fast, accessible fashion across Europe and the USA. Fast-fashion – as its name suggests – churns out product after product as quickly as it can; some have been famously reported as taking a mere two weeks for a concept to go from idea to store shelves.

These brands emerged from what has become known as the Galician apparel cluster, an area in the very north of Spain, famed for its traditional textile production. Historically women in the more remote area of northwest Spain began to sew at home as a means to earn additional income while their husbands were away fishing at sea. What started as a necessity grew into its own industry of handcrafted linens and clothing. Unlike larger areas of Spain the coastal region of Galicia was poor, a factor which meant cheap labour was more readily available and the advantages of an entrepreneurial spirit more intensely felt. As the sewing skills of the population grew, so too did the opportunity for larger business owners to harness the people-power of the area to their own ends — and so the roadmap to fast-fashion as we know it began. However despite strong roots in Spain the profit imperative meant that brands originally based in these areas, such as Galicia and Catalonia, moved outside Europe as they expanded, avoiding EU regulations to exploit garment workers in poorer countries. Soon the real cost of such rapid turnarounds for people and the planet became evident. 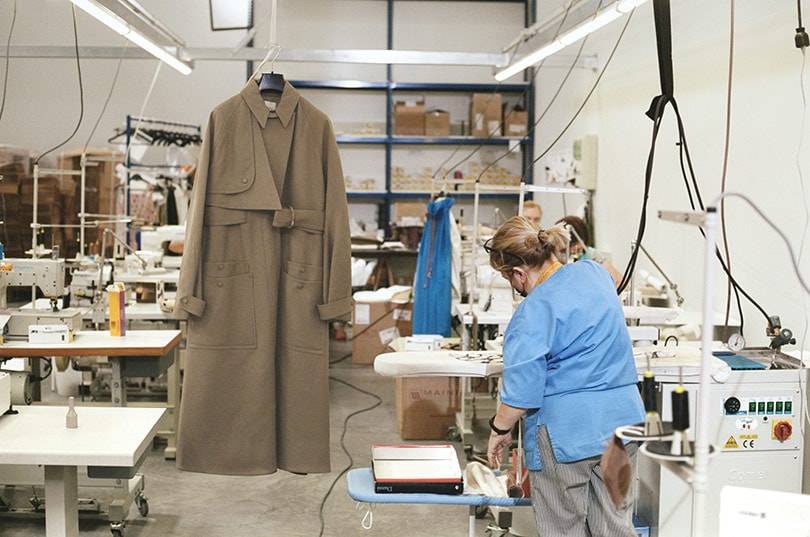 With consumers becoming more socially and environmentally conscious, demand has grown for ‘sustainable’ fashion made in an ethically and ecologically friendly way. Yet it’s all too easy to imply change without implementing it, and many campaigns by high-street chains have profited from shoppers’ guilty consciences through deceptive ‘greenwashing’ with eco-fashion claims rarely matching up to the stark reality of the factory floor. A recent analysis by the European Commission of the language used by fashion retailers found that 42% of ‘sustainability’ claims were “exaggerated, false or deceptive.” Real sustainability comes from consuming less, a model that simply isn’t appealing to companies who depend on impulse buys. So how to fix the fast fashion merry-go-round? Step outside it.

A number of young Spanish brands are doing just this, atoning for the transgressions of over-consumption by embracing the heritage of Spanish craftsmanship and understanding that quality pieces take time to put together. For these labels there’s a renewed focus on the hard-working hands at the heart of the process. With this mood, Miista have invested in their own factory in the North of Spain. “We need to restore the art of craft back to the North of Spain” says Miista’s founder Laura Villasenin. “After decades of Spanish fashion being diluted into a high street product, I want young people to see fashion factory careers as relevant, exciting and viable”.

In the north of the country there’s an abundance of traditional crafts to take inspiration from. Take the humble espadrille, with its soft sole of Jute, now a must-have summer shoe, its simple but elegant design originates from Catalonia, in the north east where the footwear featured as a signature part of the area’s traditional costume. Textiles and in particular handmade linens have also been produced in Galicia since the Middle Ages, with the process of spinning the material a central part of social life, providing a time in which people would sing or tell stories. 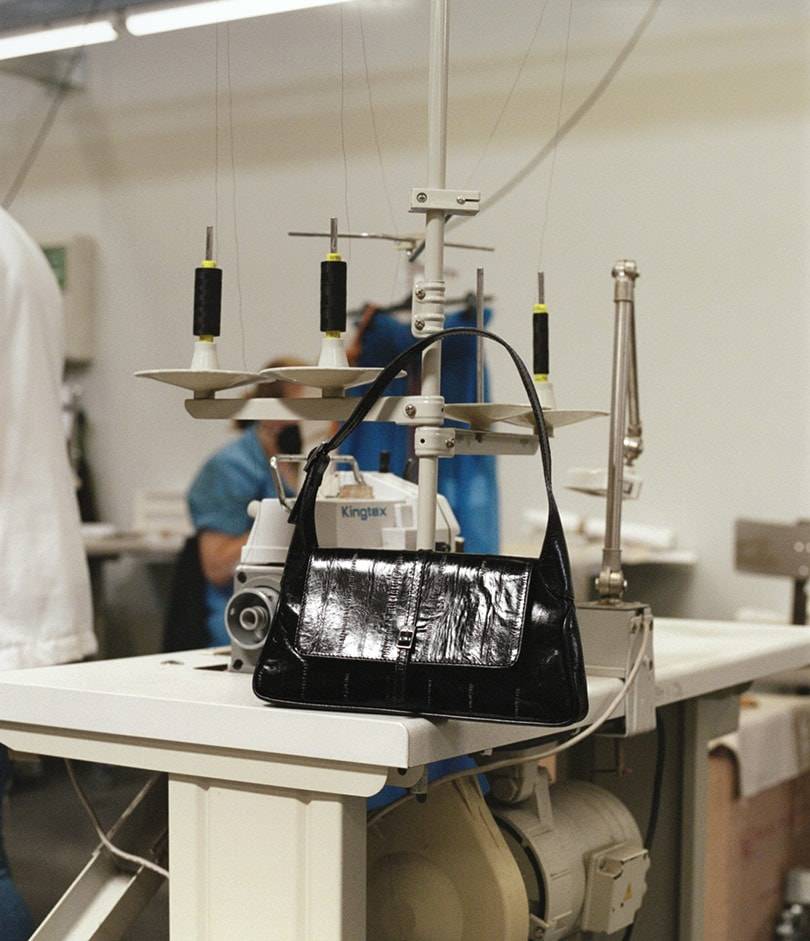 Textiles and in particular handmade linens have also been produced in Galicia since the middle ages, with the process of spinning the material a central part of social life, providing a time in which people would sing or tell stories.

Unlike the titans of fast-fashion, smaller independent brands are able to restore attention to the details of handmade production: nimble fingers that can sew through thick sleeves of leather; eyes that can expertly align two swatches of fabric; hands that can weave the finest wool in intricate patterns for hours upon end. 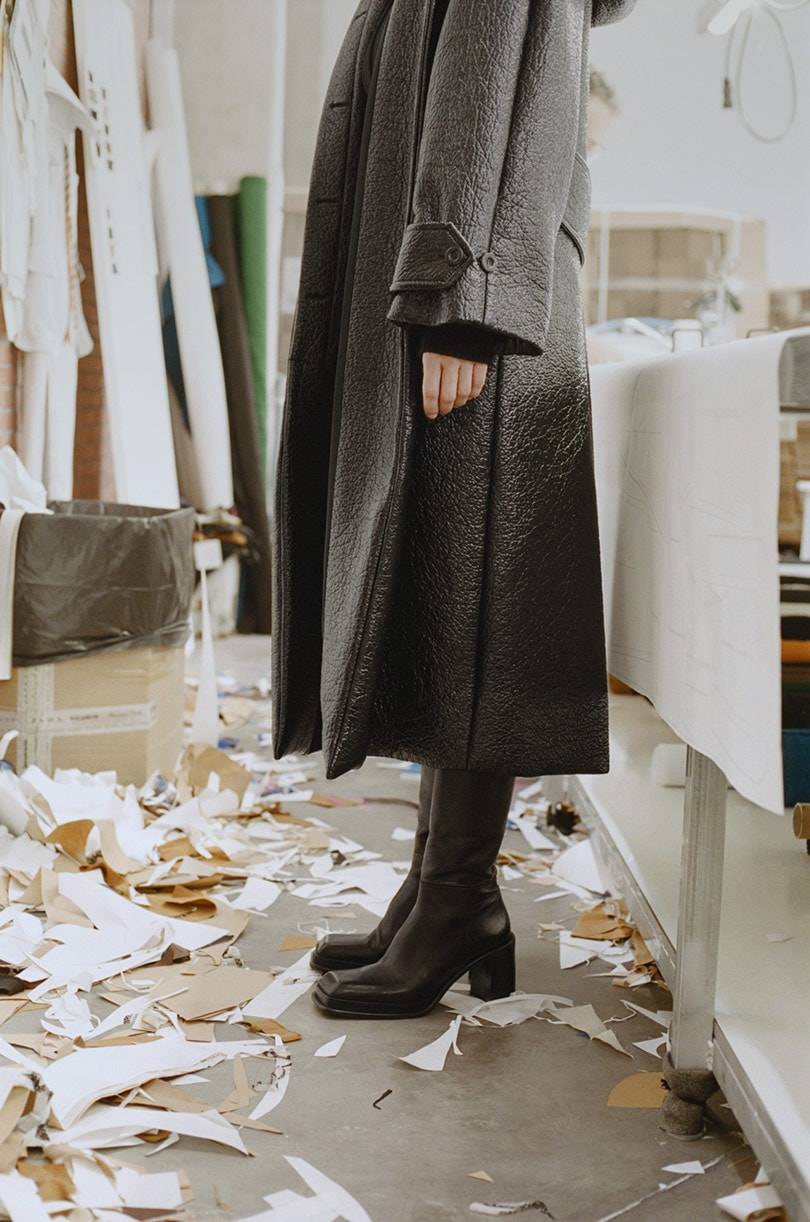 Sustainable means slowing down, creating concrete actions rather than elaborate advertising campaigns that spin one story while the workers on the ground tell another. It’s no coincidence that many successful young Spanish brands have been born and bred on Instagram. The image they promote includes at its heart clear communication with their customers about how, where, and by whom their clothes are made.

Rather than outsourcing labour to save costs, by establishing their own factories and studios in Spain labels such as Miista are fostering a culture that invests in community, taking ownership and responsibility for every moment that goes towards the creation of a piece, re-energising artisanal skills for the next generation. As we begin to think more consciously about what we buy, every purchase sees us enter into a specific world: by buying an item you’re aligning yourself with a set of values; you’re putting your money where your mouth is. A concrete action, however small, makes its mark in a world of spin.

A trip to Sheffield’s John Lewis was the most intense childhood treat. I’ll mourn its passing | Rachel Cooke